The opera, King Solomon and the Queen of Sheba, is coming to Bath Guildhall on 17 July 2021 as part of UWE Bristol’s Freedom in the City Festival which celebrates the city’s connection to Ethiopian Emperor, Haile Selassie.

Influenced by African musical genres and opera from across the continent and the African diaspora, King Solomon and the Queen of Sheba explores the Ethiopian legend of the first Emperor of the
Solomonic Dynasty as told by two female Rastafari devotees. The opera was created by acclaimed composer and singer, Juwon Ogungbe, and first performed in Theatre Peckham in 2019. Featuring an ensemble of classical singers from diverse heritages, the performance at Bath Guildhall will be just the second time that the opera has appeared on stage in front of a live audience.

The performance is part of Freedom in the City, Festival of Learning; a seven-month-long series of online and in-person events across Bath exploring Ethiopian and Rastafari culture. Set up by UWE Bristol Associate Professor Dr Shawn Sobers, the festival seeks to celebrate cultural inclusivity in the city and explore the history and impact of Emperor Haile Selassie during his time in Bath.

The festival is funded by the Arts and Humanities Research Council as part of their EDI Engagement Fellowships which supports researchers whose work focuses on equality, diversity and inclusion. All events, including the opera, are free and open to the public.

Opera director, Juwon Ogungbe, said: “On a visit to Ethiopia several years ago, I visited their National Gallery. I became really inspired by the exhibit of the Queen of Sheba’s compound. After hearing her story, the seduction by King Solomon and the birth of their son, I wanted to retell this legend that has so much importance and symbolic value in African history. I’m really excited to present this piece for the first time since the pandemic began, with some brilliant and diverse creatives. Sharing the story with Bath is of special significance because Emperor Haile Selassie – a direct descendant of the Solomonic Dynasty, once lived in the city.”

The opera takes place on 17 July 2021 at 3pm and 7pm at Bath Guildhall. The evening performance will be followed by a question and answer session (Q &amp; A) with the cast and production team. A filming of the opera and the Q & A will also be available to view online on Saturday 31 July 2021 from 6.30. To book your free ticket visit freedominthecity.org

This production of King Solomon and the Queen of Sheba is funded by the Arts and Humanities Research Council, supported by University of the West of England and Fairfield House, Bath.

UWE Bristol
The University of the West of England (UWE Bristol) has a global and inclusive outlook, with approximately 30,000 students and strong industry networks and connections with over 1,000 employers. Research at UWE Bristol focuses on real world problems and the University plays a
pivotal role in the regional economy. With over £300 million invested in infrastructure, buildings and facilities across all Campuses, UWE Bristol is creating a place for learning that is innovative, ambitious, connected, enabling and inclusive. UWE Bristol is ranked 21st in the UK in the Guardian university league table, as well as joint second in England for student satisfaction, and was awarded the highest possible rating in the Teaching Excellence and Student Outcomes Framework (TEF) 2018,
achieving GOLD Standard.

Opera information
The performances are to be semi-staged.
The ensemble will comprise of classical singers of diverse heritages and a piano accompanist. 

The piece is inspired by the Ethiopian legend about the Queen of Sheba’s visit to King Solomon in Jerusalem. As a result of the time they spent together, the Queen gave birth to Menelik I – the first Ethiopian Emperor of the Solomonic Dynasty. Haile Selassie was the last reigning Emperor to come from this lineage and the 225th descendent of King Solomon and
Queen of Sheba.

 The story is also of significance to the Rastafari Movement, because of Haile Selassie’s divine status within the faith.
 The piece features a subplot about two female Rastafari devotees who meet in the airport at Addis Ababa, Ethiopia. They are both on their way to Shashamane – the Rastafari commune that lives on land that was donated to the faith’s devotees by Haile Selassie.
 These devotees discuss the marginalisation of women in Rastafari ceremonies, known as Groundings. Eventually they draw inspiration from the assertive and adventurous spirit that motivated the Queen of Sheba to travel to Jerusalem to visit Solomon. Without the Queen of Sheba, the Solomonic Dynasty of Ethiopian Emperors would never have existed. They decide to keep on negotiating with the men for reform in the practice of their rituals. 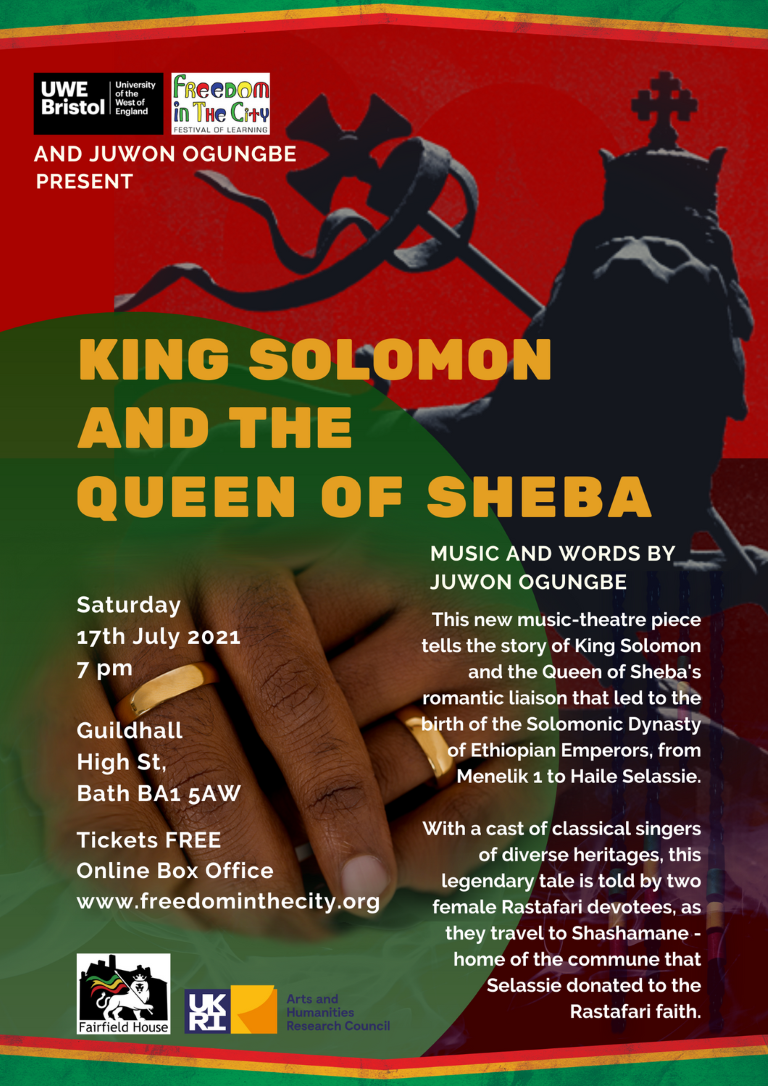 Juwon Ogungbe presents King Solomon and the Queen of Sheba

Influenced by African musical genres and Opera – from the continent and its Diaspora – the legend of the first Emperor of the Solomonic Dynasty is told by two female Rastafari devotees, traveling to the Shashamane commune in Ethiopia that the last reigning Emperor, Haile Selassie, donated to the Rastafari faith.

Juwon Ogungbe said: “On a visit to Ethiopia several years ago, I visited their National Gallery. I became really inspired by the exhibit of the Queen of Sheba’s compound. After hearing her story, the seduction by King Solomon and the birth of their son, I wanted to retell this legend that has so much importance and symbolic value in African history. I’m really excited to share this story with audiences in the Uk and abroad.”

The first performance of King Solomon and the Queen of Sheba was at Theatre Peckham with an ensemble of classical singers from diverse heritages, and a youth chorus from Theatre Peckham, in a semi-staged presentation, supported using public funding by the National Lottery through Arts Council England.

Juwon Ogungbe is a distinguished opera singer and composer, as well as a performer in a range of other genres. He has composed for the BBC, the Royal Shakespeare Company and the Southbank Centre amongst many others. In 2018, his operatic works have been in various stages of development at Opera North, Grimeborn Opera Festival (Arcola Theatre) and at the Dhow Countries Music Academy, Zanzibar. More information about Ogungbe’s work can be found at www.juwonogungbe.com and www.afrocentriccreatives.com 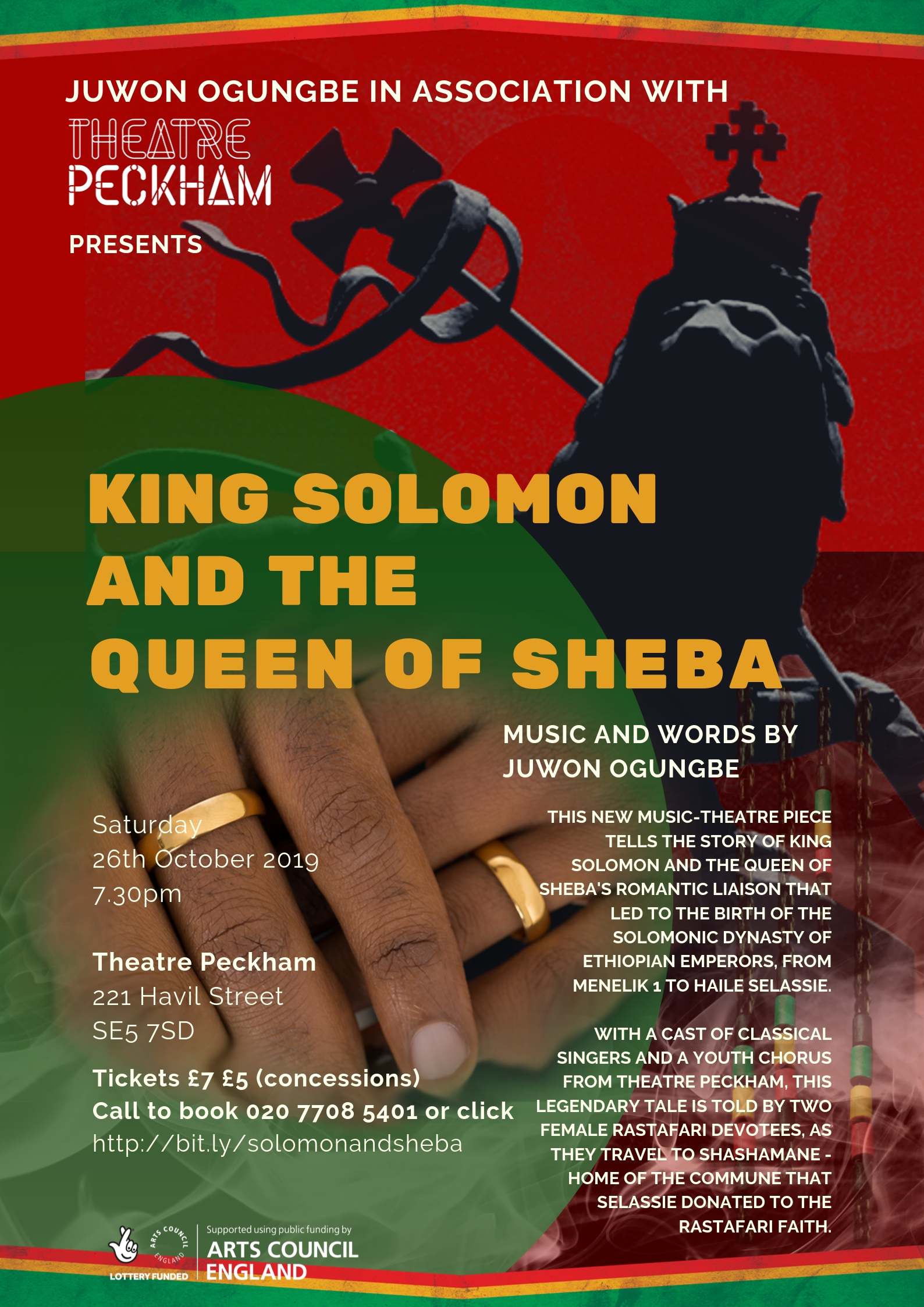